The Queen, Art and Image, Scottish National Gallery until 18 September 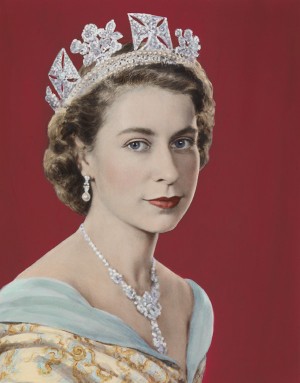 This exhibition displays images of Queen Elizabeth II spanning the 60 years of her reign.  There are formal portraits, official photos, media images and those by contemporary artists.  They reflect the traditional majesty, sovereignty and splendour of her position, her family values, the intrusion of press and television into her private life, major events affecting her role, and a modernised monarchy where she has changed her style and is more accessible to the nation.

Overall, the tradition of royalty is captured, but in an ever changing world the transformation to modern royalty (greater informality) has been portrayed.

The versatility of John Byrne is amazing: writer, illustrator, filmmaker, painter and printmaker. However I think he is better known for having won six BAFTAS, a few years ago, for his bittersweet TV series “Tutti Frutti”.

I was curious to go and see his exhibition as I have never before seen any of his paintings. It certainly was a very satisfying experience. The way he uses colours, his diversity of materials, his creativity and variety of styles (it seems he refuses to cultivate a single one) is outstanding. I found every picture a joy to the eyes. I also admired his ability as a draughtsman.

The highlight for me was “Don’t look now but ….” (water colour and pencil). The two male figures are holding half a pint in their hands; they are standing and trying to support each other. They really remind me of revellers having a good time on a Saturday night.

It is worth while also to have a look at his new children’s book “Donald and Benoit” which has been written and illustrated by Byrne himself. It is very funny.

“The Banned Books” Exhibition at the National Library of Scotland George IV Bridge Until Oct. 30

Oscar Wilde with his saying “An idea that isn’t dangerous is unworthy of being called an idea at all” used in the room dedicated to Politics, can serve us as a guide for this interesting exhibition. It isn’t the book that counts but the ideas behind the written words.

The exhibition is divided by topics: religion, politics, society and sex, plus, “Living with censorship” where it is explained the strategies invented by writers and editors in order to bit the censors. Each topic is very well documented not only with books and explanations of why, how, what, where but also, in the case of “Lady Chatterley’s Lover”, with television interviews from the general public.

There was no surprise in finding out that books were banned, interfered, cut, and burned from 14th/15th century to the 21st century. However to see that the American Edition of “Harry Potter” has been in trouble with the Fundamentalist Christians because they considered it to be a “glorification of paganism” was unbelievable.

I really enjoyed this exhibition and fully recommend it, in particular to people who like history and reading. 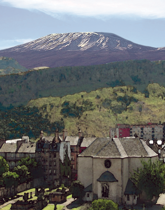 The exhibition is open from 10am to 6pm with music at lunchtime each day between 12 and 1pm which adds a delightful variety of live, reflective music.

The exhibition features a view from two extinct volcanoes, Arthur’s Seat and Mount Kilimanjaro.  This is a very interesting exhibition which features works from established artists including Rosemary Bassett and John Cannavan.  Two young artists from Moshi, Paul Ajola and Cliff Yeti, will provide an African perspective.  There is also a wall featuring the works of 70 emerging young artists and writers from the Holyrood cluster schools.  Arthur’s Seat and Mount Kilimanjaro have been directly encountered up close as well as framed in their urban or rural context.

This is a very charming little exhibition which was most enjoyable.

The artist Alexander Voitsekhovsky’s work can be seen at the Scotland-Russia Institute, 9 South College Street.

There are two separate exhibitions.  One is upstairs where Alexander Petrovich Voitsekhovsky’s oil-painted, colourful pictures can be seen.  He is a graphic artist from Russia.  His endearing treatment of everyday life is tempered with irony introduced through elements of absurdity, fantasy and surprise.  He has had solo exhibitions in Russia, USA, Switzerland, France, Japan, Israel, England and now in Scotland at the Edinburgh Festival.

The other exhibition is downstairs.  The work of two Scottish lady artists from the Highlands of Scotland, Vicky Stonebridge and Allison Weightman are showing their brilliant paintings.  They were inspired by the poems of the Russian bard Vysotsky.

Vysotsky in Russia and Robert Burns in Scotland are the two Bards with one soul.

Tommy Beavitt, a Scottish singer, writer and translator was singing the Bard’s poems in Russian and English accompanied with guitar, this Russian tradition.

I liked the show and recommend it.