The Strange Undoing of Prudencia Hart, National Theatre of Scotland 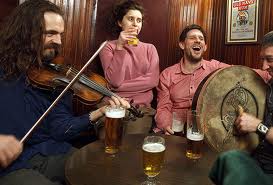 This play is set in a pub, a rather large pub with lots of tables.  The performance was packed and everyone was given free whiskies – it was like a large lock in in a pub.  The play is set in Kelso on a cold, snowy winter’s eve.  The cast were very good actors and musicians, the music was good and one can imagine being trapped in Kelso in that sense it was much ado about confusion.

Captioned, unfortunately only on one side.

This allegorical play opens in a poor farm on the border of Spain and France.  Two sisters, Beatriz and Rosa are happy, preparing for the wedding of the younger sister, Rosa.  Suddenly the house is commandeered by soldiers, including the groom, who has led them there.  A covetous farmer enounces his neighbour to the army, who plan to execute him but due to the intervention of Beatriz, he is sent into exile leaving his daughter, who is the catalyst for what follows.  She never speaks and no one will take responsibility for her.  Unwillingly, Beatriz, who is the pivot of the play, takes it upon herself to take her to her father.

In their search they stumble from conflict to conflict, through time and space where they experience some kindness but more often are witnesses to the apathy and horror during war, pestilence and famine.  Beatriz is further burdened with a small sick boy and an orphaned baby.  In the different areas the girl is seen as the cure or the cause of the troubles.  In this seemingly hopeless tast Beatriz becomes more depressed and anguished at the futility of it all  However after words of encouragement that she shouldn’t give up continues with feelings of renewed hope.

The cast were very good, but special mention should be made of Catherine Walsh, who played the part of Beatriz, and was seldom off stage druing the continuous performance. The set was cleverly designed into three areas on different levels, with several exits and allowed the story to progress.

Why, ‘The Wheel’?  In the closing scenes, you’ll realise why.  You may also choose to interpret the play’s message as ultimately hopeful.

Beatriz, convincingly played by the formidable Catherine Walsh, is the unwitting guardian of a three children.  They must travel in search of an elusive father, through the arenas of war, across continents and a century of devastation. With brilliantly directed use of the bi-level set, we see Biatriz grow spiritually, through strange encounters and horrendous situations.

We are constantly unnerved by hidden doors, like a hellish advent calendar,  bursting open to disgorge now, a bloody, hooded torture victim;  now, from on high, a dusty cascade of plundered footwear, their owners consigned to the concentration camp.

’Don’t look!’ abjures Biatriz, powerless to prevent harm from entering the souls of the children.  Yet surely, it is Biatriz’s compassion, rather than the alleged mystic powers of the nameless Girl, which conspires to keep the three alive within the citadel of this woman’s humanity.

Beware:  images from this play will burn themselves onto the memory.

Perhaps it is as well I was shielded from their full force, by the necessity to read the caption board, placed well beyond the action.

For hearing aid users there is an induction loop, but the hall is small so use of the loop may not be necessary.

The audience was seated at tables set with polystyrene cups and biscuits.  These refreshments cost £1 paid in advance.  The liquids (tea/coffee/juices) were poured at the interval and table service avoided queueing.

The innuendo was not over indulged for comic effect and overall this was a good, humorous production for an amateur group.

The play finished on Saturday August 13, but their 2012 production would be worth a visit and if all else failed the refreshments are good value.

Another Macbeth, the Flatpack Theatre at the Quaker Meeting House 15-20 August 2.15pm

Be prepared for a remarkably high standard of performance from an amateur group bringing sincerity to Shakespeare’s  tragedy.

The text had been faultlessly shortened to accommodate Fringe time-space and the actors, all of them word-perfect, felt the rhythm of the verse. Shortening such a play of necessity requires the players to speak rapidly so it was a joy to hear Brian Hibberd’s clear enunciation, as he played Duncan, King of Scotland and later Macduff (this was particularly true for members of the audience with poor hearing.) Graham Ford, in the part of Macbeth, convinced us of this tortured man’s plight, as he explored the range of doubt, fear and ‘vaulting ambition’, urged on by his scheming Lady, and finally realised his gross error in believing the prophesies of the witches. Moderating the volume and varying the tone of his voice in scenes of high emotion would enhance his performance yet further.

Used to good effect coloured lights were played onto two white curtains hanging centrally on the black backcloth, whilst a hamper of props left-stage held the only costume changes required. The play opened with the three black-clad, white-faced ‘Weyward Sisters’ standing motionless at the front of the stage until the music began, they then moved some props and the card-playing group behind them left the stage for the action to begin. Those three – Niki Davison, Isabella Mullen and Laura Furlong – represented minor characters or soldiers, messengers, servants and most notably the witches, needing only a  coloured band or small prop to distinguish them as they changed seamlessly  from one part to another.

A small but appreciative audience followed the action in all its intensity, an hour and a half having slipped by.

I had some free time from 12-30 to 3 pm and wanted to see something. I went to three different venues and asked if they had available loops to help people with problems hearing. All of them were very nice in trying to help. However, none of them did have anything although they knew about loops.

In the end I choose Anton’s Uncles because the person who sold me the ticket was very sure that I wouldn’t have problems in following what was about. I trusted him.

The interpretation by 4 male actors, was very “physical” and “energetic”.   There was little talking. Every now and then I recognised something from Chekhov’s play.  Vanya (Mark Skeens), Astrov (Jaxcon L. Ryan) were brilliant. The stage manager, although a “black shadow”, could be seen doing his job which I liked.

On stage there were simply 2 tables, 3 chairs, a rug and a samovar (one Russian touch) that at one particular moment of the representation (tea time), came down from the top (with the help of a rope) to land on one of the table. The actors wore European suits whose jackets they put on and took off, accordingly, with the rhythm of music. They moved around themselves and the furniture as they talked and sang, lay on the floor or knelt down. I didn’t hear much of what was being said or sang but it wasn’t essential (as I was told) I was able to follow what was happening anyway.

The time passed so quickly …. It was thoroughly entertaining. I did enjoy it and the audience, by the way everybody clapped, did as well.

As a hearing aid user I found every word audible.

Bashir is an Algerian political refugee in Montreal, Canada.  He is employed as a supply teacher, taking the place of a female teacher whose suicide was witnessed by her Grade 6 class.  He is a dedicated, enthusiastic teacher but his teaching style is alien to his new culture.

Evidence of Bashir’s difficulties adapting to his new environment and his emotional state emerge through conversations with his pupils and others.  The role is demanding and well performed.

Although principally a one-man show there is a girl on stage who says very little but floats about with a scarf.  Her function is rather obscure – is she the ghost of a dead teacher?

This is a very thought-provoking piece of theatre as there is a lot going on and it highlights the problems encountered by immigrants in a strange land.

As a hearing aid user, I found every word audible.

The action opens with Private Tommo Peaceful lying in bed.  It is a night in 1916 and Tommo awaits dawn when he will be executed for disobeying an order.  In the time that is left to him Tommo remembers his happy childhood in rural Devon and intersperses these memories with the horrors of war in the frontline.

In this one-man performance Tommo expertly plays himself, his brother Charlie, his mother, an old woman, a German soldier, army captains, schoolteachers and Molly, a friend from his childhood.

This is an excellent play, portraying the futility of war, but it is not as depressing as you might imagine.  A performance much appreciated by a capacity audience.

Waiting for Alice Friday 3rd to 29th August 2011; 12.30pm not 15th Pleasance Courtyard, Tea and biscuits will be served.

This was a very interesting look into Alice in Wonderland, as it takes place before  Alice was written into the book.  There were five in the cast, the Rabbit, Mouse, Mad Hatter, Turtle and an extra.  There were about 30 in the audience.  The venue was a hut in the Pleasance courtyard.

It all takes place in the middle of the Mad Hatter’s tea party.  Each of the audience on entering  were presented with a beautiful bone china cup and saucer with a biscuit.  The bone china was amazing.  The cast were surrounded by it.  The rabbit was brilliant, he was not dressed as a rabbit, his acting skills were so good his actions meant you knew he was a rabbit – very cute, so clever.   Mad Hatter and Mouse were instantly recognisable, Turtle was amazing, with a crash helmet on her back as the shell – so inventive!

The audience and myself laughed a lot.  I would, without any reservations recommend this play of fifty minutes to anyone who is young at heart and has a good imagination.

This was a most enjoyable fifty minutes of fun, so cleverly done by young, eager, wonderful actors.

A full house awaited the opening of the first show of the season, with the stage set with white sheets covering most of the furniture and an expectant audience wondering what lay beneath?

With humorous actions and facial expression, the male stage manager checked details and hung a notice – ‘The Apothecary’, before the first of the three women entered with a flourish.  In a three-scene comedy the women – Catherine Barrett, Hilary Strong and Angela Vick – exaggeratedly made fun of bits of history – the Mediaeval plague, French revolution and 40s wartime in Bletchley Park (top secret code-deciphering centre).

Quick costume changes behind the screens, whilst the stage manager unveiled or moved furniture, enabled the artistes to take the action forward in time and to re-enter with exuberant outfits for le salon Artistique, for instance.

Clearly the show appealed to many, in particular to members of the audience who belong to amateur dramatic societies; laughter greeted allusions to current issues, to vulgarity  and to some of the over-numerous puns.  To advantage the script could well be tightened up to cut the running time by about 10 minutes.

Some of the acting was very good.